Why do I need my chimney swept?

There are 3 basic reasons why you should get your chimney swept:

How do I know if my chimney needs sweeping?

You should get your chimney swept if you have:


How often do I need my chimney swept?

This depends on how often you use your fire and what you burn. A general guideline is:

This will always depend on how often you use your chimney.

Smokeless Coal - Once a year

Oil - Once a year

Gas - Once a year

Does it matter what I use for fuel?

With wood though, there comes a caution. Wood must be well seasoned before it is used in a fire. This means that all the sap and moisture should be removed from it. This is accomplished by covering the logs, leaving some ventilation for air, for at least a year from when the tree was cut down. If you use logs that are not seasoned, they will not burn well on the fire. This means they will give very little heat out but, more importantly, they will cause a build up of creosote. Most of the creosote cannot be removed by sweeping because it bakes onto the chimney walls. As the layer of creosote increases, so does your chance of a chimney fire.


Why does my chimney smoke?

There are different reasons why your chimney may smoke. Below is a list of the major causes. It may be that only one, or a combination of any of them could cause the smoke to blow back into your room.

How can I stop birds nesting in the chimney?

Birds nesting, especially Jackdaws, can be a problem. More so the nearer you get to the countryside. There are companies who make purpose built bird guards. These should always be used in preference to putting chicken wire on the pot. Proper bird guards are strong enough to withstand any efforts from the birds to pull them off. They do not reduce the size of your chimney pot in any way (which is important for the draw of your chimney) and they also allow for the sweep's brush to come completely out of it, ensuring a more thorough clean.


I have a gas fire. Do I still need the chimney swept?

You should have your gas appliances checked and serviced regularly by a Corgi registered engineer. This should be done yearly or more often if a problem occurs (See important advise on Carbon Monoxide). At the time of the service, the engineer will check the draw of the chimney and, if there is a problem, sweeping the chimney will almost certainly be necessary.

Why do I have bits falling down the chimney?

Even after the chimney has been swept thoroughly, it is normal to have a small amount of bits falling. This could include soot, sand or bits of cement. This problem can increase with the age of the chimney because the sand-based render will loosen off over the years. Generally, this is not a problem but is just something that occurs with older chimneys. Another reason can be that the wind and the rain dislodge bits which can fall down into the grate or appliance. This can be lessened by fitting the correct type of cowl. (Ask your chimney sweep for advice).

Can the chimney be cleaned properly with just a vacuum?

No, a vacuum is used to catch the soot and dust before it enters the room and also for cleaning off the ledge after sweeping the chimney. Using a good quality chimney sweeping brush or a combination of brushes is the only method, at the moment, which will clean the chimney properly.

What is carbon monoxide?

Carbon Monoxide is colourless, odourless and has no taste. It is a killer! During an average year about 50 people die from Carbon Monoxide poisoning caused by fumes from faulty heating appliances. More than three times that number end up in hospital. Carbon Monoxide can be given off by any appliance which burns fossil fuel such as gas, coal or oil. It can enter your home if:

The danger signs are as follows:

What can you do to safeguard yourself from Carbon Monoxide?

If you're buying a Carbon Mononxide detector, look out for one that is kite marked to BS 7860, but never rely entirely on these devices.

Carbon Monoxide sometimes makes people feel ill. If you develop any of the following: Drowsiness, Headaches, Chest pains, Sudden giddiness when standing up, Sickness, Diarrhoea and Stomach pains, switch off your appliances and see your doctor at once.

The above information was released by the Consumer Safety Unit of the Department of Trade and Industry 1996.

What does the safety check cover? 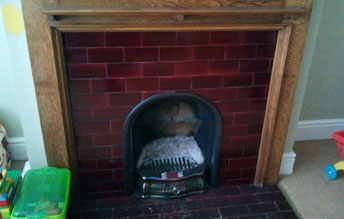 TL Chimneys offers a variety of chimney sweeping services to the general public, including residential and commercial customers, using the latest methods to achieve the best results and to ensure your chimney and flues are clean and safe.